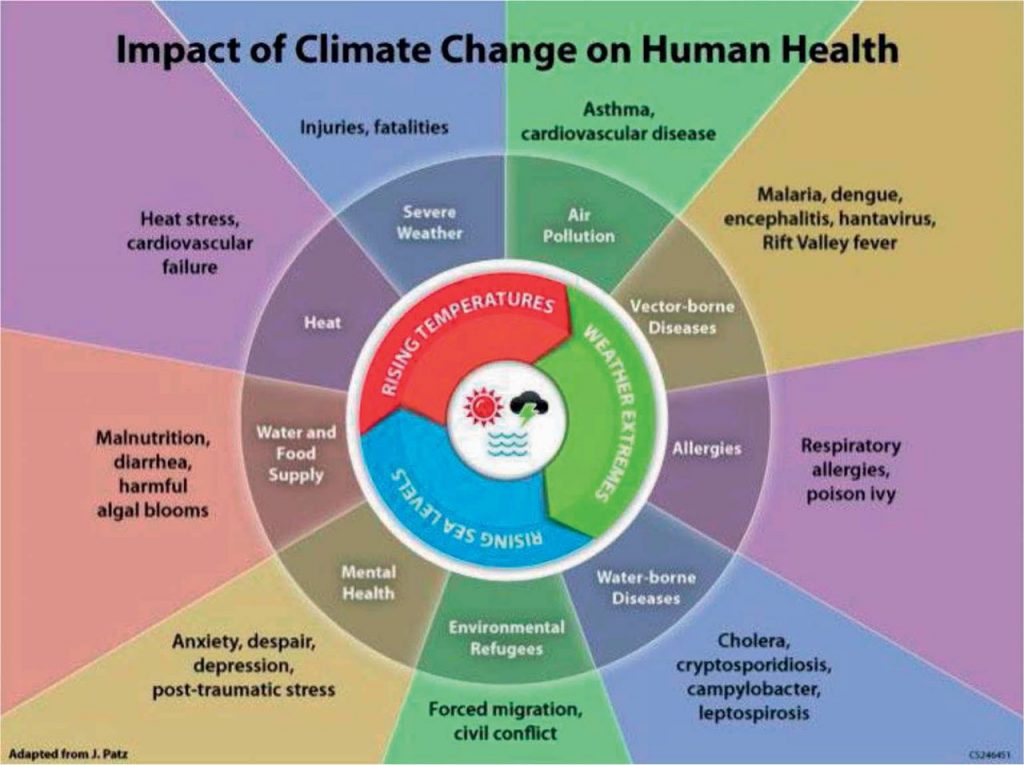 There’s a common misconception that humans are only now, in the industrial age, changing and affecting the natural world. In truth, humans have shaped, impacted, and damaged our environment from the very beginning. From breathing to farming to recreation, humans exist in a symbiotic relationship with the natural world. The problem with symbiosis, however, is that a power shift in the relationship can have reverberating effects. We see this at a global level with the human-caused climate crisis (although sometimes these effects are difficult to connect back to climate change, making transparent communication around climate data essentia) and we see this on a community level when we examine the relationship between the environment and human health. In honor of National Public Health Week, I want to highlight why the field of Environmental Health matters, spotlighting how inequitable our current system is when it comes to protecting the health of all pe

On a global scale, there is indisputable evidence that climate change negatively impacts human health. For example, rising sea levels and intensifying storms are destroying homes and creating climate refugees, who suffer physically and are at a high risk of experiencing trauma and other mental illness; warming global temperatures facilitate the movement of disease-carrying insects, which can travel further distances for longer periods of time; and declining air quality exacerbates respiratory illnesses, such as asthma. People of color are at a higher risk than their white counterparts of experiencing these negative health effects, particularly when it comes to air pollution and extreme weather (look no further than the response to Hurricane Katrina). Climate change, then, must be analyzed through a frame of health and racial equity, or the most vulnerable populations will continue to suffer from the worst effects of climate change.

The greatest tragedy, perhaps, is that climate change is manmade. Pollution was so common in the early days of the Industrial Revolution that London often found itself covered in a thick layer of smog. The silver lining to this crisis is that there is also evidence that, with action, these negative effects can be mitigated. For example, the Montreal Protocol of 1987 effectively reduced the gaping hole in the Ozone layer by phasing out ozone-depleting substances (ODS), such as chlorofluorocarbons (CFCs) which were used in aerosols and refrigerants. Scientists now estimate that the Ozone layer will heal within this century and have stated that the “Montreal Protocol is expected to result in avoidance of more than 280 million cases of skin cancer [and] approximately 1.6 million skin cancer deaths.” The Montreal Protocol remains one of the strongest cases for international cooperation to fight climate change and protect human health.

Sink water in Flint, MichiganOn a more local level, environmental health comes into play when we consider our own communities, and the populations of people that are the most likely to experience the negative impacts of environmental pollutants. Take Flint, Michigan for example, a community of color that has spent years dealing with lead (a known neurotoxin) in the water supply from corroded old water pipes. The crisis began when the city decided to change their water source, moving from the Detroit river system to the Flint River in order to save some money. Soon, however, residents began complaining of decreased water quality (including a noxious smell) and of health impacts (e.g. hair loss, rashes). For months, these complaints were ignored by elected officials (including state officials like the Governor’s office), a stark example of environmental injustice. With the EPA failing to assist, Flint residents took legal action and sued the city and the state for not providing a safe drinking water supply. Eventually, a federal judge declared that Flint residents were in the right and implemented a water bottle delivery service to all the homes affected by the lead-poisoned water, and decreed that the state had to replace all the corroded pipes. This case study points to the need for a more robust and equitable environmental health system. Communities of color bear the brunt of environmental hazards, and race is the number one indicator for the placement of toxic facilities in the US. Systemic racism, then, determines the effectiveness of our environmental health system. In order to build a better environmental health system, racial equity must be at the forefront of all efforts to create healthy spaces for people to live, work, play, learn, and pray.

The example of Flint, Michigan highlights how the individual can play a role in demanding environmental justice. While we may not have the power to write and pass laws ourselves, organizing and lobbying our representatives is a great first step. It is critical that we understand the risks posed by environmental hazards. Beyond the obvious pollutants that we can see, there are chemicals in personal care products; pesticides used for farming; mercury in our seafood; and more. While it’s virtually impossible to avoid harmful chemicals and pollutants, it is important to stay informed and find ways to get involved if these issues are impacting your community. Today, in honor of National Public Health Week, I challenge you to look inward and educate yourself on potential health hazards in your community, or find a local organization near you that’s working on these issues and see how you can get involved.  If you are not sure where to start, try looking at your town or city’s municipal government website, since most towns and cities have a climate action plan and environmental health protections already in place.  Finally, remember that we have the power to impact our environment in a positive and productive way. By building systems that protect the most vulnerable populations, we can protect human health for all people and our environment.