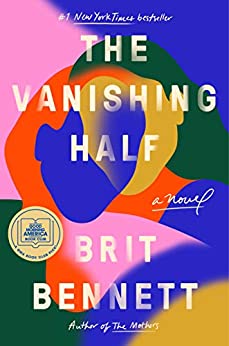 1. The Vanishing Half by Brit Bennett

This novel follows Desiree and Stella Vignes, twin sisters who are Black but can “pass” for white.  After they both run away from their hometown, Stella decides to live her life as a white woman, marying a white man and never speaking of her past, while Desiree seeks out more connection to her Blackness.  The story follows the Vignes twins through their lives, and later picks up with the story of their children.  The Vanishing Half explores the nuances of racial identity, family, and privilege, and asks the reader to consider how our pasts intimately shape the people we choose to become.

2.The City of Brass Trilogy by S.A. Chakraborty

This rich, atmospheric trilogy starts off with The City of Brass, following Nahri, a con-artist living in 19th century Cairo, who accidentally summons the Djinn warrior Dara, and is thrust into a world of magic, Djinn, intrigue, and burgeoning conflict.  In her journey, Nahri also encounters a reluctant prince named Ali, who himself is slowly unraveling the simmering tension at the center of his city of Daevabad.  This series interrogates colonialism, identity, and the devastation of war, and the writing will transport you fully to another world.

In Gyasi’s second novel, she follows the story of Gifty, a PhD student at Stanford who studies the neurological science behind depression and addiction.  This novel paints a moving portrait of an immigrant Ghanaian family living in Alabama, and explores themes of grief, loss, and the push and pull between science and faith.

This novel follows Queenie Jenkins, a mid-twenties Jamaican British journalist, as she navigates the trials and tribulations of new adulthood.  Queenie explores themes of love (both of others and self), identity, and womanhood through the lens of a woman who goes searching for love in all the wrong places.

Told from alternating perspectives of a bank-robbery gone awry and the police interviews with the quirky hostages afterwards, this funny and touching story explores family dynamics and meditates on the essence of human nature.  Backman asks readers to remember that no one truly knows what they’re doing in life, we’re all just very good at pretending.

6. To Kill a Mockingbird by Harper Lee

Why this classic story?  Because of its enduring legacy and timeliness.  Set in the Depression-era American South, To Kill a Mockingbird tells the story of Scout, Jem, and their father Atticus Finch, as he fights to free a Black man falsely accused of a heinous crime.  This story explores the horrific reality of racism through the eyes of a child, asking readers to contend with those moments in life where we lose our innocence.

1. Born a Crime by Trevor Noah

Comedian Trevor Noah tells his life story in this touching memoir, detailing his experience growing up in apartheid-era South Africa as a “colored” child (one of the three main racial identities constructed in South Africa, referring to a someone who is mixed race; having a mixed child was illegal at the time of his birth).  At its heart, his story is a love letter to his Black Xhosa mother, who defied the law to have him, and raised him with love even when she was experiencing abuse at the hands of Noah’s stepfather.  Emotional and humorous, this is a must-read story.

2. An Indigenous Peoples’ History of the United States by Roxanne Dunbar-Ortiz

We’ve all heard the saying, “history is written by the winners.”  This book takes that phrase and tosses it out the window.  Dunbar-Ortiz takes a look at the last 400 years of U.S. history through the eyes of the Indigenous people who lived here first, naming explicitly the genocidal policies of the US government.  This is a must read for history enthusiasts wishing for a more honest take on American history.

3. Me and White Supremacy: Combat Racism, Change the World, and Become a Good Ancestor by Layla Saad

A combination of historical context-setting, salient definitions, and a workbook, Me and White Supremacy takes readers through a 28-day journey of learning and self-reflection.  This book asks white people in particular to examine their unconscious biases and address their white privilege.  A must read for those looking to work towards anti-racism in their personal and professional lives.

4. My Own Words by Ruth Bader Ginsburg

In honor of Ruth Bader Ginsburg’s passing, we are including this book, which contains both RBG’s own words and biographical info to set the context for each chapter.  In My Own Words, Justice Ginsburg reflects on her journey as a woman in law, gender equality, and her work at the Nation’s highest Court.  Her words are as relevant as ever, and her legacy will continue to burn a bright path for a long time to come.

5. Stamped from the Beginning: The Definitive History of Racist Ideas in America by Ibram X. Kendi

In this thought-provoking book, Kendi explores the lives of five different famous figures of American history, using their narratives to illustrate how racism took root in America.  Kendi works to expose the insidiousness of anti-Black racism, explaining how racist ideas were used to justify discriminatory policies and practices, from the beginnings of slavery all the way through until today.  This is an essential read for those seeking to deepen their commitment to anti-racism.

6. Tribe: On Homecoming and Belonging by Sebastian Junger

Tribe takes a thoughtful look at the human condition, examining the psychology behind soldiers who return home with PTSD, and how that mirrors our deepest desire as humans to belong to a group.  Junger meditates on war, belonging, mental health, and more, thoughtfully asking readers to consider the threads that tie us all together.

In this powerful book, Ruby Hamad exposes the problems entrenched in white feminism.  White women have historically benefitted from the work of women of color, who have to fight longer and harder to achieve the same rights (look no further than the 19th Amendment).  Hamad expertly explains how, in order to achieve racial justice, white feminism and the privilege afforded to white women over women of color needs to be interrogated and challenged.

This picture book follows a mom and daughter pair as they face a Saturday where everything seems to go wrong.  But at the end of the day, the daughter reminds her mother that what matters most is that they got to be together.  A sweet story for young children about what’s really important in life.

2. Separate is Never Equal: Sylvia Mendez and Her Family’s Fight for Desegregation by Duncan Tonatiuh

A timely story about Sylvia Mendez and her fight for the desegregation of public schools, seven years before Brown v. Board of Education.  A great entry point for talking to your children about racial justice.

This book celebrates Black hair through the telling of a fun, fantastical story about a young girl named Aria.

This book showcases children doing common acts of kindness (donating to animal shelters, helping with chores) and serves as a great jumping-off point to have a conversation with your kids about compassion and empathy.

This tale of a young boy and girl facing extreme weather in India offers a powerful image for the threat of climate change, and a child-friendly look at the resilience of the human spirit.

6. What is Given From the Heart by Patricia C. McKissack (author) and April Harrison (illustrator)

After fires burn down a local Temple, a young boy considers what he can donate to help them rebuild.  This is a touching story about what we can give each other that’s immaterial, and the power of compassion.