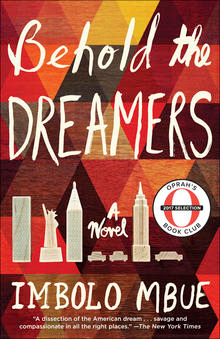 Behold the Dreamers by Imbolo Mbue

Jende Jonga and his wife Neni are Cameroonian immigrants living in Harlem.  Jende finds a job working for Clark Edwards, a senior executive at Lehman Brothers, and Neni is happily pursuing a degree in pharmacy.  After the economy crashes and a series of disasters ensues for this young couple, they are forced to ask themselves, is the American dream worth it?

There There by Tommy Orange

There There is a relentlessly paced multigenerational story about violence and recovery, memory and identity, and the beauty and despair woven into the history of a nation and its people. Following twelve characters, Tommy Orange weaves together their individual stories, which converge at the Big Oakland Powwow. Orange highlights the plight of the urban Native American in a stunning novel that grapples with a complex and painful history, with an inheritance of beauty and profound spirituality, and with a plague of addiction, abuse, and suicide. An unforgettable debut, and not to be missed.

The Power by Naomi Alderman

In The Power, women suddenly gain the ability to kill with just their touch. In a revealing look at our contemporary world, Naomi Alderman exposes how the world would, or more importantly would not be different, were the power in the hands of women. What does a world with women in power look like?

The Buddha in the Attic by Julie Otsuka

Julie Otsuka’s novel tells the story of a group of young women brought from Japan to San Francisco as “picture brides” nearly a century ago. She beautifully captures the brides’ numerous emotions, from their fear upon arriving to their pain in childbirth and the degrading work of cleaning up after white women. Otsuka’s work brings to life the often overlooked lives of picture brides, who bravely left behind all they knew for a terribly uncertain future.

Hillbilly Elegy: A Memoir of a Family and Culture in Crisis by J. D. Vance

Hillbilly Elegy, J.D. Vance’s humorous and moving memoir, captures the story of his family’s upwards trajectory from poor white Hillbillies to middle-class Americans. At the same time, Vance highlights the chronic struggles facing this demographic, from alcoholism to domestic abuse and the constant threat of poverty. Vance asks the reader, what does the American Dream really look like for those who can never quite seem to grasp it?

We Gon’ Be Alright: Notes on Race and Resegregation by Jeff Chang

Jeff Chang’s series of essays reflect on racial tensions and inequities facing Americans today. He does not shy away from sensitive topics, tackling the epidemic of young black people dying at the hands of white cops, and he provocatively suggests that the new problem facing America is that of resegregation. Moving, thoughtful, and sharp, these essays are not to be missed.

Dopesick: Dealers, Doctors, and the Drug Company that Addicted America by Beth Macy

In this groundbreaking book, Beth Macy of The New York Times dives deep into the heart of America’s opioid crisis, visiting affected areas from Central Appalachia to the wealthiest of zip codes. In a searing examination, Macy spotlights the role of OxyContin in contributing to America’s tendency to overmedicate, and demonstrates that no one is safe from this epidemic. Still, Macy never forgets to illustrate that there is hope, for both an end to this crisis and an end to the struggles of those fighting to quit their addiction.

To Repair the World: Paul Farmer Speaks to the Next Generation by Paul Farmer

Paul Farmer of Partners in Health presents a collection of short speeches, which highlight his take on how best to tackle the greatest health inequities of our time. He highlights unequal access to safe drinking water, the trials of global poverty, and the threat of climate change, among other topics. Farmer aims to inspire his readers to take action, believing that if people work together to address the social determinants of health, then the world can become a healthier and more equitable place.

Healing of America: A Global Quest for Better, Cheaper, and Fairer Health Care by T.R. Reid

T. R. Reid examines the state of America’s healthcare system via a comprehensive comparison to other wealthy and industrialized democracies with universal healthcare, including the U.K., Canada, Germany, France, and Japan. While he acknowledges the pitfalls of these other systems, Reid urges America to take them as examples as well, highlighting the urgent need for healthcare reform in the United States. He asks the reader to consider, is health care a human right?

Evicted: Poverty and Profit in the American City by Matthew Desmond

Evocative and heartbreaking, this book examines the lives of eight families living on the edge of eviction. Matthew Desmond provides an ethnographical look at a growing issue in America today, highlighting the underlying structural inequities that put some groups (e.g. single mothers, people of color) at a higher risk for eviction than others. Most importantly, by providing real faces to this crisis, Desmond helps to illustrate the determination and intelligence of his subjects, who persevere even at their lowest points.

An inspiring picture book about difference and tolerance follows three colors, Reds, Yellows, and Blues. When Yellow and Blue combine and Green is born, will society be able to adjust? A thoughtful introduction to diversity and the importance of inclusivity.

Alma and How She Got Her Name by Juana Martinez-Neal

In this picture book, Alma goes on a journey of discovery into her past to find out how she got her very long name: Alma Sofia Esperanza José Pura Candela. In her author-illustrator debut, Juana Martinez-Neal opens a treasure box of discovery for children who may be curious about their own origin stories or names.

We Came to America by Faith Ringgold

This picture book examines the millions of people who have called America home, offering a lesson for kids on diversity and the history of immigration in the United States. Vividly expressed in Faith Ringgold’s sumptuous colors and patterns, We Came to America is an ode to every American who came before us, and a tribute to each child who will carry its proud message of diversity into our nation’s future.

Based on the true story of one family’s struggle for voting rights in the Civil Rights–era South, this moving tale shines an emotional spotlight on a dark facet of U.S. history. This book looks at the disenfranchisement of black Americans and the long history of oppression preceding it, offering a thoughtful examination of one child’s experience growing up under segregation.