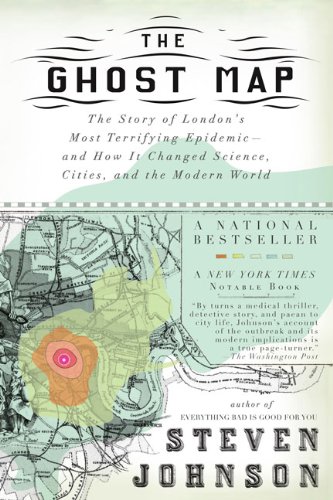 The Ghost Map by Steven Johnson

Steven Johnson takes readers to where it all began with the 1854 cholera outbreak on Broad St. in London, which is the event many consider to be the start of public health. The book tells the story of the cholera epidemic but follows two protagonists, Dr. John Snow and Reverend Henry Whitehead, whose knowledge of the local community and skepticism of modern medical theory led them to determine the initial cause of the outbreak. And while it’s a historical narrative at the core, Johnson keeps readers engaged with modern implications of the outbreak and how it forever changed science, cities, and our understanding of the spread of disease.

Triumph of the City by Edward Glaeser

More than fifty percent of the world is living in cities, and by 2050 it is estimated that percentage will jump to nearly seventy. Where we live has a significant impact on our health because it determines the education, transportation, jobs, and healthcare we have access to. Edward Glaesar, a Harvard economics professor, commends cities and claims they foster innovation and make us richer, healthier, greener, and smarter. This book provides a different perspective for how to look at our lived environments, and provokes debate around environmentalism, poverty policy, and urbanization.

Mass Incarceration in America has direct impacts on community health, and Michele Alexander’s book examines the history of mass incarceration and the modern context to the prison-industrial complex. She explores the disproportionate rates of imprisonment for black and brown people and claims that the criminal justice system has created a subtle system that intentionally functions in the same way as Jim Crow laws. Health professionals and community coalition members are uniquely positioned to address issues of health disparities, including those that result from the current prison system. A study by the American Journal of Public Health found that life expectancy decreases by two years for every one year spent behind bars, and these health problems often affect later generations as well. To address health equity, it is important to understand the context of systemic racism and this book provides an in-depth analysis of that.

Food Justice: Food, Health, and the Environment by Robert Gottlieb and Anupama Joshi

With the popularity of Whole Foods and community-supported agriculture (CSA), the demand for fresh and local food is rising in one part of the country while rates of obesity and diabetes are rising in another. Low-income neighborhoods lack major supermarkets but abound in fast-food chains and liquor stores, which contribute to community health outcomes. This book explores the history of food injustices and describes ways to radically change the system so that food is grown, processed, transported, distributed, and consumed equitably. The authors highlight grassroots activism on the community level through creating farm-to-school programs, transforming vacant lots into community farm shares, and empowering youth to demand healthier options in their schools’ cafeterias. For community coalitions working with food security, this book can be a valuable resource in ways to engage and empower community members to work locally towards food equity.