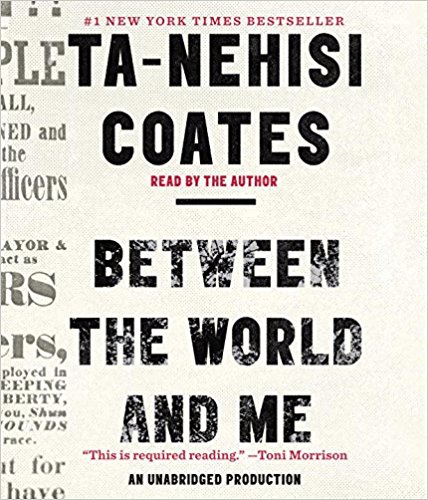 Between the World and Me by Ta-Nehisi Coates

The award-winning journalist from The Atlantic brings a powerful and intimate memoir in the format of a letter to his adolescent son. He tries to answer some of the biggest questions about our nation’s history and current race relations. What does it mean to be black in America today? What is it like to inhabit a black body – one that has been historically exploited and enslaved, and today, threatened, locked up, and outright murdered – and how do you navigate the world within it? Coates weaves together personal narrative, reimagined history, and current events to bring together a story of racial awakening and a vision for the future.

The Book of Unknown Americans by Cristina Henriquez

This novel follows the narratives of multiple families immigrating to America and finding themselves in the same apartment complex in Delaware. More closely, it tells the coming of age story of two teenagers, one from Panama and one from Mexico, who fall in love while navigating through all the struggles of adolescence, racism, violence, and an anti-immigration sentiment that never seems to stop. Woven into their stories are the testimonials of men and women who have come to the United States from all over Latin America, and their journeys offer a resonant new definition of what it means to be American.

Spanning three countries and four generations of a poor Korean fishing family, this novel begins in early 1900s Korea with Sunja, a young woman growing up in a poor fishing village who moves to Japan when an unplanned pregancy threatens to bring shame to her family. So begins the sweeping saga of a family in exile from its homeland and caught in the indifferent arc of history. Pachinko is a beautiful story about family, sacrifice, and finding your place in a country you don’t feel belongs to you.

Ain’t I a Woman: Black Women and Feminism by Bell Hooks

A groundbreaking work of feminist history and theory analyzing the complex relations between various forms of oppression. Ain’t I a Woman examines the impact of sexism on black women during slavery, the historic devaluation of black womanhood, black male sexism, racism within the recent women’s movement, and black women’s involvement with feminism

The Immortal Life of Henrietta Lacks by Rebecca Skloot

Her name was Henrietta Lacks, but scientists know her as HeLa. She was a poor black tobacco farmer whose cells—taken without her knowledge in 1951—became one of the most important tools in medicine, vital for developing the polio vaccine, cloning, gene mapping, in vitro fertilization, and more. Henrietta’s cells have been bought and sold by the billions, yet she remains virtually unknown, and her family can’t afford health insurance. This story gives a face to the woman behind it all and tells a riveting story of the collision between ethics, race, and medicine; of scientific discovery and faith healing; and of a daughter consumed with questions about the mother she never knew.

The Color of Law by Richard Rothstein

In this groundbreaking history of the modern American metropolis, Richard Rothstein, a leading authority on housing policy, explodes the myth that America’s cities came to be racially divided through de facto segregation—that is, through individual prejudices, income differences, or the actions of private institutions like banks and real estate agencies. Rather, The Color of Law incontrovertibly makes clear that it was the laws and policy decisions passed by local, state, and federal governments that actually promoted the discriminatory patterns that continue to this day.

Across nearly every metro area, middle-class neighborhoods are disappearing. Our cities and suburbs are being replaced by a patchwork metropolis, in which small areas of privilege are surrounded by vast swaths of poverty and disadvantage. The rise of a winner-take-all-urbanism, with a small group of winners and a much larger span of losers, signals a profound crisis of today’s urbanized knowledge economy that threatens our economic future and way of life.

In 1929, in the blue-collar city of Portsmouth, Ohio, a company built a swimming pool the size of a football field; named Dreamland, it became the vital center of the community. Now, addiction has devastated Portsmouth, as it has hundreds of small rural towns and suburbs across America–addiction like no other the country has ever faced. How that happened is the riveting story of Dreamland.

A Is for Activist by Innosanto Nagara

Every letter is the definition of a different social movement. For F — kids learn about Feminism, when we get to G – kids learn about the meaning of grassroots organizing and why its important.This beautifully illustrated ABC book uses rhyming and alliteration to get your little reader excited about social change. If your child loves this work they may enjoy the author’s new work My Night at the Planetarium, which illustrates the important role the arts play in resistance.

Stepping Stones tells the story of Rama and her family, who are forced to flee their once-peaceful village to escape the ravages of the civil war raging ever closer to their home. With only what they can carry on their backs, Rama and her mother, father, grandfather and brother, Sami, set out to walk to freedom in Europe. Nizar Ali Badr’s stunning stone images illustrate the story.

Rad Women Worldwide tells fresh, engaging, and amazing tales of perseverance and radical success by pairing well-researched and riveting biographies with powerful and expressive cut-paper portraits. The book features an array of diverse figures from 430 BCE to 2016, spanning 31 countries around the world, from Hatshepsut (the great female king who ruled Egypt peacefully for two decades) and Malala Yousafzi (the youngest person to win the Nobel Peace Prize) to Poly Styrene (legendary teenage punk and lead singer of X-Ray Spex) and Liv Arnesen and Ann Bancroft (polar explorers and the first women to cross Antarctica).  An additional 250 names of international rad women are also included as a reference for readers to continue their own research.

A Pakistani-American Muslim girl struggles to stay true to her family’s vibrant culture while simultaneously blending in at school after tragedy strikes her community in this sweet and moving middle grade novel from the award-winning author of It’s Ramadan, Curious George and Golden Domes and Silver Lanterns. Amina’s Voice brings to life the joys and challenges of a young Pakistani American and highlights the many ways in which one girl’s voice can help bring a diverse community together to love and support each other.