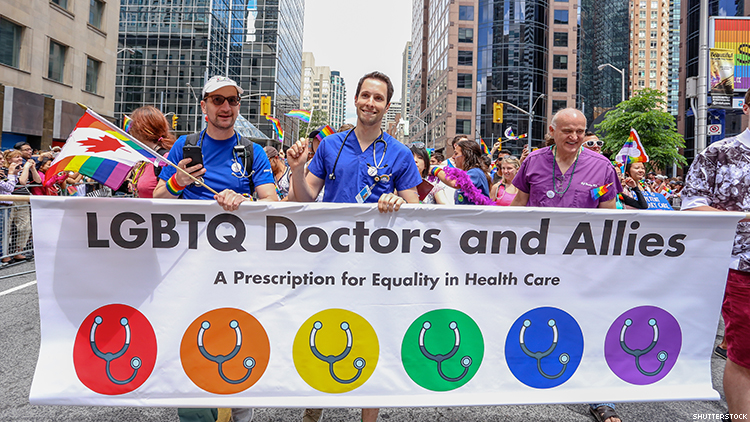 Compared to cisgender, heterosexual individuals, folks among sexual minorities face much wider health disparities. According to Fenway Health, a community health center that specializes in LGBTQIA+ care, LGBTQIA+ folks experience higher rates of HIV and other sexually transmitted diseases, substance use, smoking, depression, and anxiety. On top of that, they also face lower rates of preventative screenings. This is attributed to a mixture of discrimination, stigma, and structural barriers created by poor policies and a history of injustice. It wasn’t until the 1970s that homosexuality was no longer considered a mental health disorder and 2013 that being transgender was no longer referred to as a “gender identity disorder,” language that perpetuated stigma against folks in the community.

makes folks feel seen, heard, and valued. While some strides have been made to collect better data, there is still room for progress. The Centers for Disease Control (CDC) began to ask questions regarding sexual orientation on their youth risk surveys in 2015, and in 2017 they began to ask questions around gender identity. Before doing so, there was no way to study the extent of health disparities among this population because the data just wasn’t being collected. On a larger level, as we are amid the 2020 census collection, it is also important to note that sexual orientation and gender identity (SOGI) data is not being collected. Bills have been introduced in the House and Senate to require these questions to be on the census by 2030, however, none have passed.

So what can community coalitions do about this? There are opportunities for coalitions to collect data at their local level by encouraging their community

health centers to collect SOGI data, along with adding these questions to your community’s Community Health Needs Assessments (CHNAs). Collecting data for your community that captures the experiences of the LGBTQIA+ community enables you to better advocate and create policies that serve them. Advocating for better policies that serve LGBTQIA+ folks works to help increase access to healthcare, but more importantly, it shows that communities care about their LGBTQIA+ friends and neighbors and that they are committed to supporting them. As community coalitions, often the most impactful thing we can do is leverage our power to uplift the voices and priorities of our residents.

The LGBTQIA+ community encompasses all races and ethnicities, religions, and socioeconomic statuses, and because of this, it’s important to look at health outcomes in an intersectional way. To do so and support good health for all, community coalitions play an important role in every level. Not only can we make our communities more welcoming and inclusive, but we can advocate for better data collection that informs sound policy.